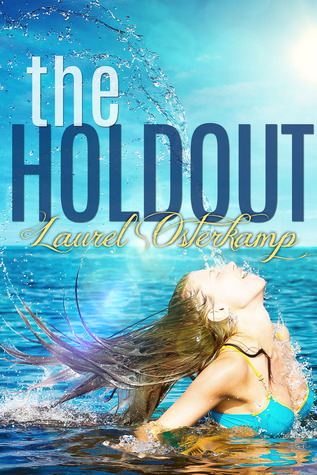 I have been a fan of Survivor since the U.S. version first aired in 2000. Every season, I find myself wondering what goes on behind the scenes, how much the editing has affected my opinions about the castaways and to what extent cast members keep in touch when filming ends. I also love a good showmance, especially one that has gone bad, so I was very excited to read The Holdout. While this book offers Survivor-like drama and an interesting take on what life could be like for a reality show contestant after filming ends, it contained several subplots that didn’t really grab my interest.

The story is told through the main character’s eyes and shifts back and forth from the present (during the airing of the show, while Robin serves as a jury member) to the past (leading up to and during the filming of the show). At first, I had a hard time with the flashing back and forth, but it wasn’t a big issue once I knew to expect it. Another thing that kind of bothered me was that I didn’t understand the point of the jury duty storyline until near the end. I found myself skimming those sections because I wanted to get to details about The Holdout.

The sections about The Holdout were just as entertaining as watching an episode of Survivor, which is what I was hoping for. I think anyone, whether a fan of Survivor or not, would enjoy these parts. Osterkamp did a nice job of describing the contestants, behind-the-scenes betrayals, challenges and Island Assembly (aka Tribal Council). One thing that got to be a bit too much was the overuse of exact Survivor phrases, such as “Want to know what you’re playing for?” and “Worth playing for?” In fact, most of what the host of The Holdout (Joe Pine) says mirrors the things that the host of Survivor (Jeff Probst) says.

There were A LOT of characters to keep track of, but Osterkamp did a nice job of weaving them into the story. Whether all of the characters were essential or not, I just don’t know. I definitely enjoyed getting to know the cast of The Holdout more than I enjoyed learning about Robin’s family and fellow jury members, but that’s simply because I was more interested in the reality show aspect of this book. As for Robin, I liked her, but she was kind of flat. Many of her thoughts and feelings were never conveyed to others, making a lot of her interactions trivial. One of my favorite parts of the story was when she fully expressed herself during an Island Assembly. Grant was a total jerk, as expected, but I did wonder about his intentions at the end. Hmm…

“We search for absolute justice because it doesn’t exist, and not the other way around.”

“Endings and beginnings merge all the time, so it’s not always easy to distinguish when change happens.”

If you enjoy Survivor, you might enjoy this book, but keep in mind that there is much more to the story than all the reality show drama.