Cat Lavoie was born in the small town of Jonquière in Québec, Canada. At the age of nineteen, she packed up her things (mostly books) and moved to the big city of Montreal where she currently lives with her tempestuous cat Abbie—who is both adorable and quite possibly evil.

An incurable Anglophile since her university days where she studied English Literature, she can often be found daydreaming about her next trip to London. Since she’s an expert at the art of procrastination, Cat is easily distracted by cooking and home improvement shows—even though she’s not particularly good at either.

Cat grew up watching soap operas and legal dramas and—had she not decided to be a claims analyst by day and write chick lit by night—she would have probably become a designer suit-wearing lawyer. Or a character on All My Children (which is what she really wanted to be when she was twelve).

If you’d like to connect with Cat Lavoie or learn more about her, she can be found on the following social media sites:

For a chance to win a copy of Zoey & the Moment of Zen, visit Cat’s Facebook page, or click here to join the Reader Appreciation Author Hop. 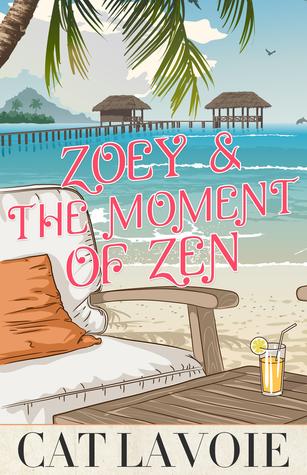 When coffee shop owner Zoey Everwood takes her obsession with ex-boyfriend Braden too far, everyone—except Zoey—is convinced a bit of fun in the sun at the Moment of Zen Wellness Resort will help her get over him once and for all.

But Zoey’s relaxing vacation turns out to be anything but peaceful when she meets Shane Lawson, a resort guest who bears a striking resemblance to Braden. And things get even more complicated when the resort’s owner starts spilling secrets about Zoey’s aunt Nessa, the woman who raised her. Add a snarky Wellness Coordinator and Nate Holmes—Shane’s grumpy friend—to the mix, and you’ve got the recipe for a perfect tropical storm.

When Zoey comes back home with a new husband instead of tacky souvenirs, she must convince everyone she hasn’t completely lost her mind. As Zoey and Shane struggle to keep the magic alive outside the resort, Zoey discovers that she isn’t the only one having trouble letting go of the past. And when Nate drops a bombshell that changes everything, Zoey must decide if the old saying is true—what happens at the Moment of Zen stays at the Moment of Zen.