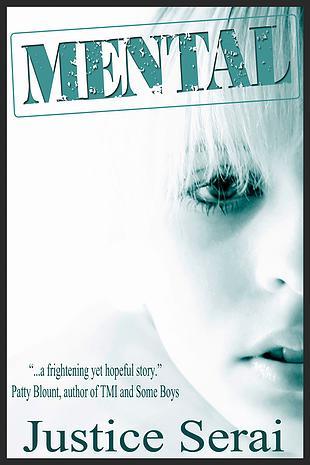 Mental by Justice Serai provides readers with a look inside the mind of Lucy, a teen with schizophrenia. Her thoughts are confusing, shocking, scary, creepy and heart-breaking. I had to backtrack a few times because I didn’t understand what I was reading, but in hindsight, the confusion was necessary for authenticity. After all, the thought process of a schizophrenic surely isn’t always easy to follow. In addition to Lucy’s battle with mental illness, this story is also about how she falls for Julian, a young man with a disorder of his own to deal with. I really enjoyed this part of the storyline but felt that their relationship developed a bit fast, especially in light of the fact that they meet in a psychiatric facility. But despite the instalove, Lucy and Julian’s relationship is sweet and touching.

I was immediately hooked by the opening scene. Lucy’s parents are visiting her in the Norfolk Psychiatric Center, and her dad is screaming at one of the doctors. He wants to know why Lucy isn’t “fixed” yet even though they pay a lot of money for her treatment. Make no mistake, her father’s question made me cringe; however, I can understand how coping with a loved one who has a mental illness might lead to frustration and impatience. Throughout the book, Serai does a great job of continuing to show how Lucy’s disorder affects not only her but everyone around her.

I have seen mental illness up close, so this book stayed with me after I finished it. My heart ached for Lucy and those who live with disorders that must be managed rather than cured. But I also felt a sense of optimism, because Serai illustrated that it is possible to persevere when faced with a psychological disorder.

When I read e-books, I like to highlight quotes so that I can share favorites when I write reviews. Never before have I highlighted so many quotes! This is a testament to Justice Serai’s ability to touch a person’s mind and soul with the beauty and depth of words.

More than a few of my favorite quotes from Mental:

“Recovery isn’t the same thing as a cure. It’s learning to manage your illness the best way possible.”

“Sometimes, the more fancy degrees a person has, the bigger their ego. Egos can’t listen. They can only talk.”

“But when you see suffering firsthand, when it’s in your face and you watch it, live it, breathe it, something changes you irreversibly. Some might call it cynicism, but to me, it’s more like opening your eyes for the first time. I think most people’s eyes aren’t attached to their brains. sometimes I wish I could go back to being that blind.”

“He holds my face in his hands gently, and I picture him cradling my heart in the same way.” (LOVE this one.)

“I don’t go crazy. I am crazy. I just go normal from time to time.” –Anonymous

“I stare at the wall. The pictures there make me shudder. They look haunting and unfamiliar. But I know they’re mine. They come from a place deep inside. A place buried by medication and logic. The untapped part of a human’s brain. Sane people can’t access it. Few can, but the beauty in the creation is hardly ever worth the pain.”

“Schizophrenia is only ever whispered about. It’s the seedy underbelly of mental illness. There’s commercials about depression and bipolar – women standing in front of lonely windows, looking sad and contemplative. There aren’t any commercials about how the homeless lady who talks to herself on the street corner is now married and in the banking business after taking whatever pharmaceuticals paid for the advertising slot.”

“He kisses me deeply – like he’s reaching inside and pulling out every piece of me and demanding I give it to him.”

Thank you to the author for providing me with a complimentary review copy via Xpresso Book Tours.