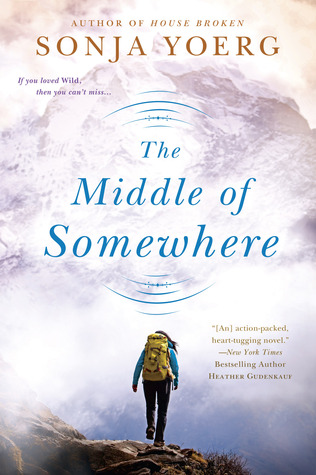 The Middle of Somewhere is the story of one woman’s quest to cleanse her guilt-ridden soul. How does she hope to do so? By hiking the John Muir Trail through Yosemite National Forest alone. However, Liz’s boyfriend Dante forces her to alter her plans (in more ways than one) when he decides to tag along.

This is one of those books that grows on you more and more with each passing chapter. Not that there was ever a point when I wasn’t interested. It was more about Liz. I didn’t like her much at first because of her steely demeanor towards Dante (who is one heck of a guy, by the way). But I kept reading because Yoerg did a masterful job of revealing the big picture bit, by bit, by bit. At first, I felt a tad let down when all of Liz’s secrets were revealed because they were such common mistakes. However, the more I thought about it, the more the point of the story resonated with me. It’s not about the mistakes. It’s about how holding onto things can prevent you from moving forward and how guilt can kill a person emotionally. I came to sympathize with and understand Liz as her tough exterior was slowly lifted.

“…there was no possibility of a clear conscience, merely the weak absolution of honesty, of confession. If only she had been raised Catholic–or within another religion that embraced the concept–she might find forgiveness and believe in it. But faith was not part of her fiber. She could not buy into the cycle of sin and penance, of death and resurrection. She would always remember what she had done, and it would always sting. She would not be washed clean.”

Besides Liz and Dante’s story, there’s a situation involving a couple of unsavory characters who are also hiking the trail. Events surrounding these characters seem unrealistic at times, but the storyline offers several good doses of suspense. It also made me realize how badly I wanted a happily-ever-after ending for Liz and Dante.

Thank you to the publisher for providing me with a complimentary copy via NetGalley.