Carol Maloney Scott grew up in the Hudson Valley area of New York surrounded by “city folk,” like her Manhattanite mom and Bronx-native Dad, who taught her to be sweet on the outside, yet tough on the inside. As a result, she has been given labels like “firecracker” or “feisty,” which she chooses to take as compliments.

Carol’s romantic history is as real (and complicated) as those of the heroines in her novels. She’s been divorced, relocated and plunged fearlessly into the turbulent waters of online dating—only to retreat, yelping at the occasionally shocking climate—before bravely renewing her efforts and finally grabbing hold of happiness, refusing to let it go.

There Are No Men is Scott’s debut novel. She is currently working on her second.

If you’d like to connect with Carol Maloney Scott or learn more about her, she can be found on the following social media sites:

For a chance to win a copy of There Are No Men, visit Carol’s Facebook page, or click here to join the Reader Appreciation Author Hop. 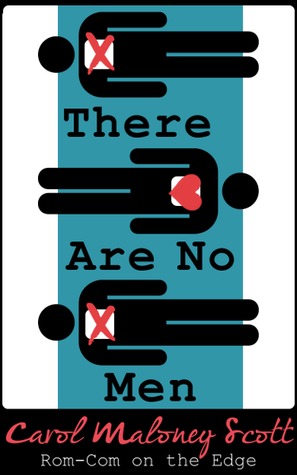 Divorced thirty-something Claire doesn’t know who’s in her dating pool—but she’s doing her best to avoid shark infested waters. Leaving her clueless and insensitive husband behind was a smart move after losing her fertility, but now she’s riding the wave of flying toupees, strange men in leather thongs and drunken nights in painfully impractical shoes. Claire desperately wanted to be a mother, but now she’ll settle for one middle aged man worthy of a second date.

After a long drought, men are flooding her shores and she’s drowning in choices. There’s Justin, the 25-year-old IT boy-genius with the GQ looks and cougar fetish, who won’t take ‘no’ for an answer. A woman would have to be a blind, lesbian nun not to fall for him, but he reminds Claire of her wasted youth. And then the charming but mysterious Dr. Nathan appears, but he’s cheating on her with his medical mistress—a demanding cardiology practice.

To further rock her boat, Claire’s ‘stable’ career in publishing has been tossed about by her floundering company’s launch of a new line of trendy, salacious books. Cookbooks aren’t selling these days, but erotica is flying off the shelves—and challenging Claire’s attitude about sex, work . . . and her tempestuous new life.

When her best friend convinces her to buddy up to the aspiring writer who just moved in across the street, Claire rejects the idea—he has already caught her in more than one embarrassing and scantily clad situation. Giving in to her friend’s nudging, she tries to ignore the details she discovers about him, including his hard rock night gig and his mesmerizing blue eyes, in the hopes his literary talents can pull her publishing house up from the bottom of the ocean.

Claire’s dilemma begs the question: Are there NO men or TOO MANY?

Claire is a thirty-something divorcee who has ventured back into the dating world. Complications arise due to the fact that she is unable to have children, which she feels eliminates the prospect of finding love with a younger man or anyone who wants children. The first couple of dates she goes on are a result of online dating – these dates offer many laughs and end horribly! On top of meeting men via the Internet, Claire is encouraged by her friend/co-worker to attend Meetup events (which don’t pan out much better than the online dating). Throughout the story, she is torn about her feelings for a younger co-worker as well as a new (also younger) neighbor – both she finds attractive and both are interested in her.

The first half of the story is quite funny. I love Scott’s snappy humor. She also includes a lot great visual language. For example: “He looks like a cross between a little boy who is afraid of the headmistress at the orphanage and a puppy who wants a belly rub.”

“Claire, you’re going out partying when Jesus was nailed to the cross?” – Claire’s mother on going out before Easter.

While I enjoyed all of the humor and getting to know Claire during the first half of the book (although she cries way too much), I felt like the story moved slowly at times. There were several occasions when I skimmed unnecessary details, such as the description of the furniture and bedding in her sister’s apartment and the fact that she picks up a glass of wine and slowly moves to the kitchen to sit down at a table. There was quite a lot of extraneous information like this in the first half. However, as soon as Nathan the “perfect” doctor (yikes!) showed up, I couldn’t stop reading because I really wanted to find out how things would pan out with him. He was so unlikeable that I loved reading about him. Claire blindly focused on his outward appearance while ignoring his MANY controlling and snobbish behaviors, which had me wanting to shake some sense into her. This kept me reading, as well–after all, she had to wise up sooner or later! The introduction of Nathan and Brandon’s character development made me really enjoy the second half.