Today was a special day for me because I became a NaNoWriMoer!

I first heard about this event last year when I started learning the ins and outs of self-publishing. Of course, I had to look it up to find out what NaNoWriMo stands for. (Psst…It stands for National Novel Writing Month, for those of you who might be encountering the term for the first time right now!) After I found out what it means, I wondered two things: What’s the point? and Why do people participate?

The point of NaNoWriMo is simple. Write a 50,000-word novel in one month! If you’re like me, not only is writing that many words in one month not so simple, it’s downright scary. But wait, there’s more. According to NaNoWriMo.org, the process is supposed to be fun and approached by the seat of your pants. Okay, so maybe trying to have fun and not editing after writing every other sentence might make the task less laughable and more doable. It’s worth a try, right?

But can’t writers attempt to write a 50,000-word novel for fun and by the seat of their pants during any month of the year? Of course they can, but the majority don’t. And even those who say they’re going to (ME, for example) often end up falling short. So why make an attempt during NaNoWriMo?

First of all, there’s something magical about setting a goal like this along with hundreds of thousands of other people. Within minutes of creating my account, I looked up friends who were participating and added them to my list of writing buddies. I also joined an accountability group on Facebook. I can’t even begin to explain the camaraderie I feel with fellow nanowrimoers. So I won’t. 🙂 But trust me, it feels great to share a common goal with so many other writers.

Second, making such a huge commitment in front of the hundreds of thousands of participants I’ve already mentioned lit a fire under me. I want to succeed, not just for myself, but for the entire community. Does it have anything to do with saving face? Yeah, okay, maybe a little. But I also want to be an inspiration to my writing buddies. Today, when I noticed that one of my buddies wrote 3,000+ words, not only was I proud of her, but it got me moving!

Third, I have my very own dashboard on the NaNoWriMo site that includes nifty progress trackers, such as a graph that reports my daily average and fun little badges to keep me motivated. For someone like me who’s driven by data and reaching milestones, it’s just plain cool. Today I wrote 2,182 words, which puts my required daily average at 1,091. I hope to decrease that average as the month progresses. 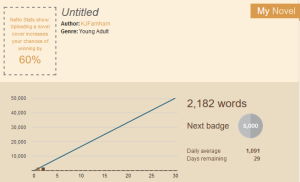 Are you participating in NaNoWriMo? If so, are you a newbie too? What’s your favorite thing about being a nanowrimoer?